After yet another sumptuous breakfast, the morning Satsang began with mellifluous Bhajans. At around 10.15 a.m., Swami glided down to the Prayer Hall and made His way to the dais. After a few more Bhajans, the gathering was addressed by Sri C. Sreenivas, Chairman of the Sri Sathya Sai Health and Education Trust. He recollected how the Hill Top bungalow, now known as Sri Sathya Sai Anand Ashram, first came into Swami’s possession many decades ago. He narrated the story of him coming to Kodaikanal Hill Top 30 years ago, and the incidents that lead to the purchase of this bungalow and the subsequent events. He spoke about the three main factors called person, place and situation which plays a very important role in this earthly sojourn, and when they are seen with sacredness, one’s perspective becomes very different. He submitted that it was through this vision of sacredness which brought this bungalow to Swami. Sri Sreenivas explained that for anything and everything there is some force behind, and it is like the dots connecting each other. He urged everyone to understand the value and serenity of the place and realise the peace within. He reminded everyone that due to Swami all are blessed to be able to see things through a different perspective and a certain sense of sacredness.

Swami then granted His Divine message and said that being in Kodaikanal is like being in the sanctum sanctorum of God. As one physically climbs the hill, the mental and spiritual awareness rises as well and makes it easier for everyone to connect with and feel the Divine. Swami went on to speak about the natural surroundings, saying that nature also helps everyone to quieten the mind and contemplate on God, since man also comes from nature. Swami went on to explain that just as one feels happy to see their reflection in a mirror, so too there is happiness amidst nature, as it is a reflection of one’s true self. Thereafter, Mangala Arati was offered to Swami and Prasadam was distributed to all. Returning to His residence, Swami lovingly distributed cameras to the students before proceeding to partake lunch with guests.

In the evening, Swami descended the stairs to the living room, at around 5 p.m. as Bhajans were in progress. After a few Bhajans, Brother Sumeet Tappoo presented a beautiful, melodious bouquet of songs in Hindi. Swami then commanded Brother Sumeet to speak and he recollected a dream in 2011, in which Swami had revealed that He would be returning in a different form. Brother Sumeet reminded everyone that these moments with Swami are precious and will not last forever, so we must appreciate and cherish every second with the Lord. He then went on to speak about the service projects that Swami has initiated in Fiji and about the Medical Centre which is now set to grow into a Super Speciality hospital for Paediatric Cardiac care. Praying to Swami for strength and support in this endeavour, Swami profusely blessed Brother Sumeet and his family, reassuring them the project would be completed within a year. Swami said that as long as one remains surrendered, God will grant the ability and strength to accomplish anything. “To be with Me, either you have to be ‘Anor Aniyan or Mahato Mahiyan’. Either you have to be the smallest of the smallest servant or you have the biggest of the biggest like Me. Choose any one – biggest like Me is difficult, so atleast small like a servant is easy! To be with Me, you have to serve!”

Talking about the upcoming Pediatric Cardiac Hospital in Fiji, Swami said “When your minds are surrendered, My work happens very fast. But the moment you doubt, you shake, you shiver and your surrender becomes weak, I stop the work! Because then you don’t learn anything. Again when you surrender, again it continues. This is how it happens. I know how will it happen, and I think it suffices if I know how it will happen! It is ok if you don’t know, as everything will happen with time. But keep yourselves surrendered. Your body, mind and heart, you should remain surrendered.” Swami commanded Brother Sumeet to sing one final song, Itna To Karna Swami. Thereafter, Swami blessed Brother Sumeet with a token of His love and felicitated all the musicians. Mangala Arati was then offered to Swami and Prasadam distributed to everyone, before Swami proceeded to take dinner with elders and guests. 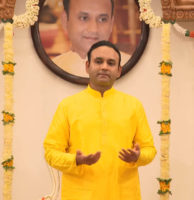 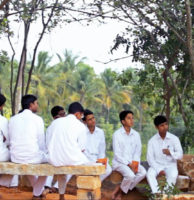 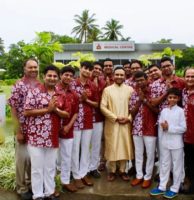